*Rate on Letterboxd*
*Rate on IMDB*

Livescream is a 2018 horror feature written and directed by Michelle Iannantuono. It premiered at the 2018 Crimson Screen Horror Film Festival in Charleston, SC, where it took home three awards – The Jury Award, Runner Up for Audience Choice, and Best Actor. It has since won over a dozen awards at festivals, and has been nominated for “Best Indie Film 2018” by both Gruesome Magazine and The Rondo Horror Awards.

Additionally, Livescream is an official selection for a number of film festivals, including the 2018 Nightmares Film Festival, 2018 Genreblast Film Festival, and 2018 Gen Con Film Festival. It has accumulated multiple other awards and nominations, including several additional wins for Best Actor and Best Feature.

Gunner Willis (Ozark, Vice Principals) stars as Scott, a popular video game streamer. Every day, over 200 loving fans watch Scott play horror games online. After a lifetime of failures and false starts, streaming games is the only thing he’s good at. It’s the thing he loves the most. Until it becomes a nightmare. Enter Livescream – a mysterious horror game sent to him by an anonymous fan. At first, he thinks the game is a low quality indie title. But when his followers start dying one by one, he soon realizes the game is far more sinister. Now, Scott will be forced through nine levels of video game hell, each level representing a different horror game niche, in order to walk away alive. It might just cost him his fans, and his soul, in the process.

“Might be the great successor of Unfriended.” – Decay Mag (full review here)

“Michelle Iannantuono pulls off something multi-million dollar theatrical blockbusters can’t do, she holds my attention from the opening scene until the game is over.” – Without Your Head (full review here)

“This is not some big film studio trying to making a buck off the gaming genre, this is genuine, knowledgeable fandom at work…Overall, Livescream is an achievement more than a simple indie title…Iannantuono is passion personified – a talented filmmaker that deserves your attention.” – Nevermore Horror (Full Review Here)

“One of the most innovative and enjoyable horror films you can see anywhere, and not just as far as indie films go. It definitely holds its own as one of the better horror films of 2018, and absolutely raises the bar on the whole “found footage” sub-genre.” – Nerd Nation Magazine (full review here)

“Livescream is a delight and a fresh take on the video game in filmmaking….maybe one of the greatest surprises of the year on its close-to-being-true-level, after Unsane.” – Decay Mag (full review here)

“Gunner’s extremely convincing performance mixed with Iannantuono’s writing draw you into this world and manages quite the feat of making you become emotionally invested in characters you aren’t able to see.” – The Horror Syndicate (full review here)

“Found footage films rely on scares you can see coming a mile away or, with some strangely popular series, an entire lack of scares or tension. Livescream relies entirely on tension and emotion to generate fear and dread. Michelle Iannantuono is not a game designer. She is, on the other hand, an incredibly gifted filmmaker that didn’t let her not being a game designer stop her from practicing her art and making the film that she wanted. ” – Superficial Gallery (full review here) 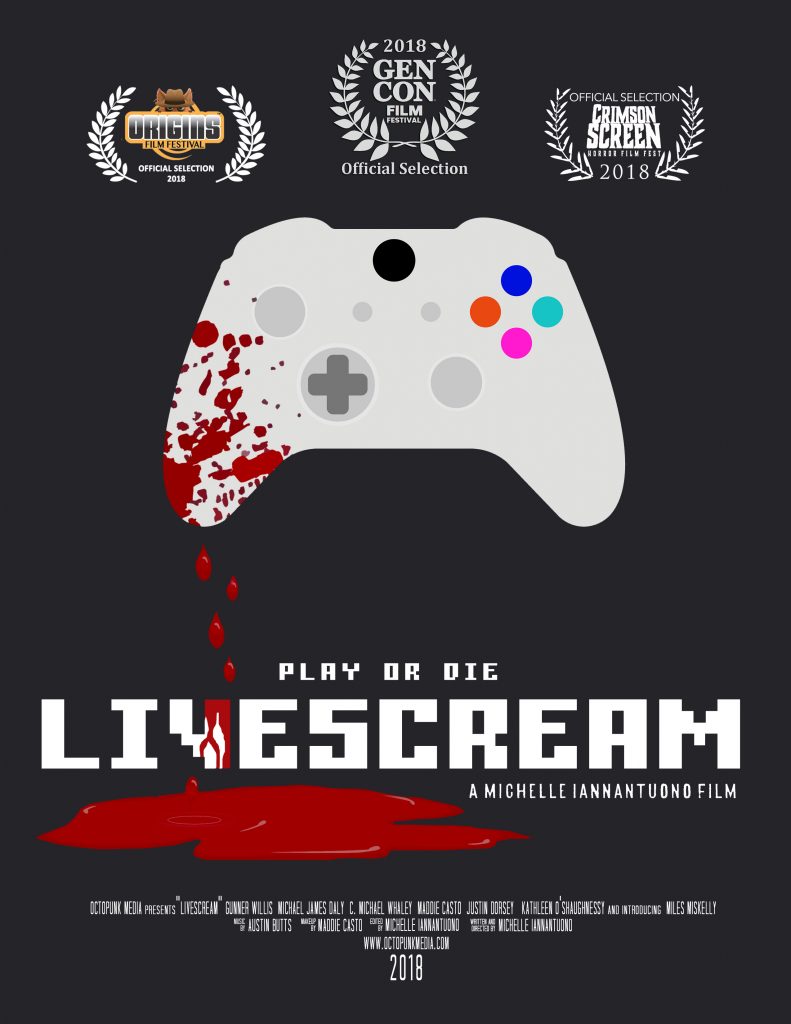