What a weekend! Raleigh Supercon (and by extension, its Super Geek Film Festival) was a total blast. I never know what to expect from festivals-within-conventions, especially of a convention that is so vendor and celebrity focused. I also prefer smaller conventions, because crowds give me the heebie jeebies. But I found that it was, on the whole, really balanced and well organized.

Mama Iannantuono and I drove up on Saturday morning and didn’t make it to the convention center until ~3:30 PM. Special shoutout to her for being whatever the film equivalent of a stage mom is, cause she drove and helped me haul around a bunch of swag.

We did have enough time to meet up with many of our friends. John Hartness, Theresa Glover, and Melissa McArthur Gilbert had a great booth repping Falstaff Books’ many titles (and thankfully, they did not have to take 11 tubs of books home with them!) We ran into Bill Mulligan and Kevin McGee on the show floor, so even 20,000 attendees couldn’t separate us from our buds. And it was nice to stop by the booths of Stuart Jaffe, Gail Martin, James Christopher Hill, Jason Graves, Davey Beauchamp, and Jason Gilbert as well. Hope all of them made lots of money!

I think the most awesome surprise in the vendor room was seeing Cheralyn Lambeth set up in the autograph hall between Flash Gordon and Prince Zuko! We joked about seeing our friend become famous, but truly, she deserves it. Cher’s been working in the business for decades, and is a master of costumes, puppets, and writing. I’m glad to see a hard-working and talented industry veteran get some recognition for a change, since behind-the-scenes folks never get as much respect on the con circuit as the actors do.

The convention center could have cranked the AC a little more, since it was toasty everywhere we went. But the crowd sizes felt fine. Crowded enough for the vendors to do well, but thin enough to give you elbow room and breathing space – and for lines to be reasonable pretty much everywhere. The only person who had a massive autograph line was Dave Bautista – and even then, I’ve seen way worse at Dragon Con and Star Wars Celebration. Autograph prices were also extremely fair across the board, most varying from $20-$40.

There were a lot of cool folks in the autograph hall – Henry Winkler, Catherine Tate, and Alice Cooper being a few highlights. I’m not really an autograph collector, so I admire everyone from afar. Except, I absolutely had to seize the day and meet Lindsay Jones.

Lindsay was there representing RWBY, along with her RWBY co-stars. I know her more from Achievement Hunter. One of the main characters of Livescream – JumpingWolf aka Jeremy Jones – is partially named after her (with the other name creds going to her coworker Jeremy Dooley, and her coworker/husband Michael Jones). 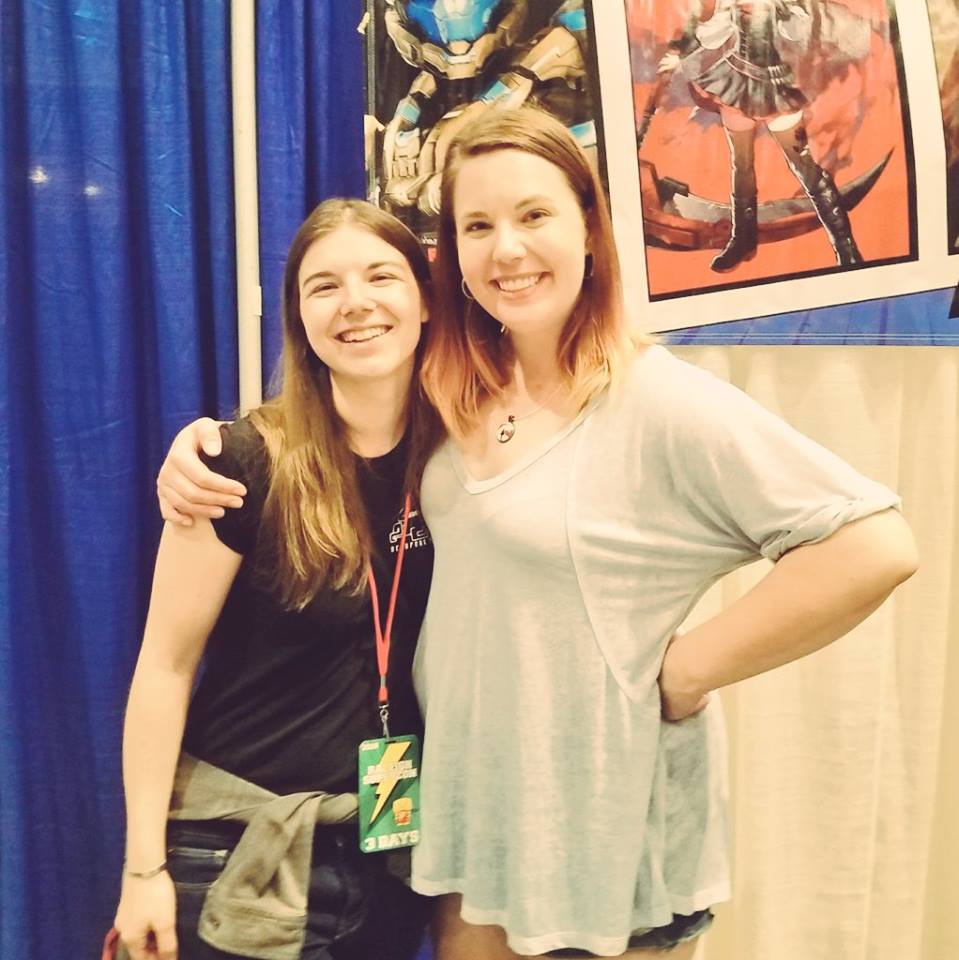 The line for Team RWBY was chill, so we got to chat for a bit. I don’t think I’ve ever gotten an autograph from someone more friendly and approachable. I gave her a gift bag with some candy and a personalized Livescream poster. I’m not sure if she’ll actually take any of it home with her, but just to be able to tell her that the AH Crew inspired so much of my film was a big deal to me.

Also, she vandalized Michael’s side of her autograph, so this is certainly the most amusing autograph I have ever received. I can’t wait to see his face when I eventually bring it to him to sign the other side! 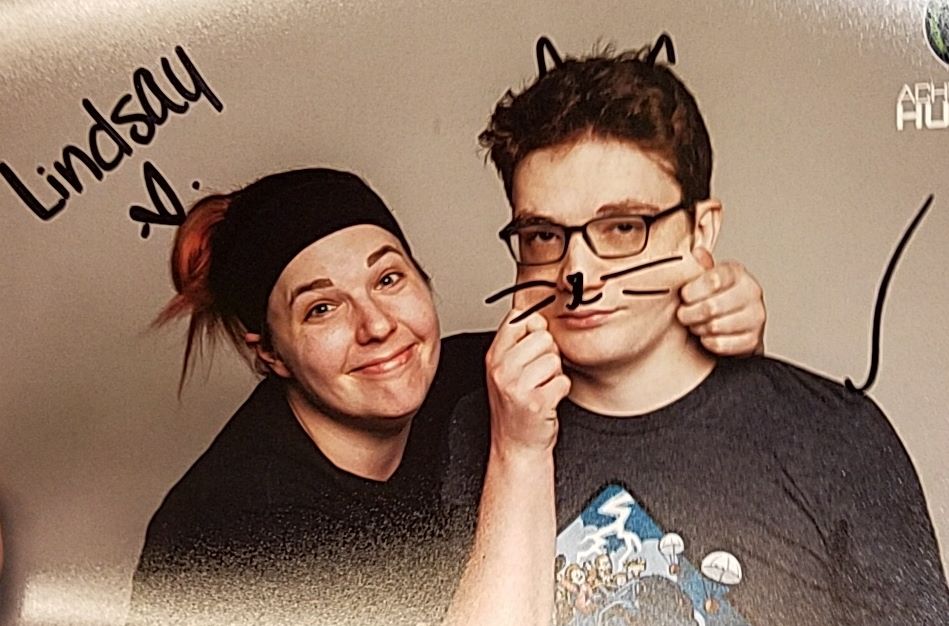 The dealer’s room closed at 8:00. Livescream wasn’t screening until 9:45 PM, so we hung outside our screening room. Not having any idea what the turnout for my film would be, I got to hustling. I assembled a bunch of Octopunk Media gift bags and set them up on a coffee table just outside the screening room. Made a sign that said “Come see Livescream, get free stuff.” And yo, do people love free stuff.

About 20 minutes before the show, we were starting to get people asking where they should line up/should they go ahead and get a seat/etc. The room was already pretty full, so festival director Chad advised us to start queuing people. And thus began the first time I have ever had to make a line for people waiting to see my film. I gave them all candy for their troubles. ;D 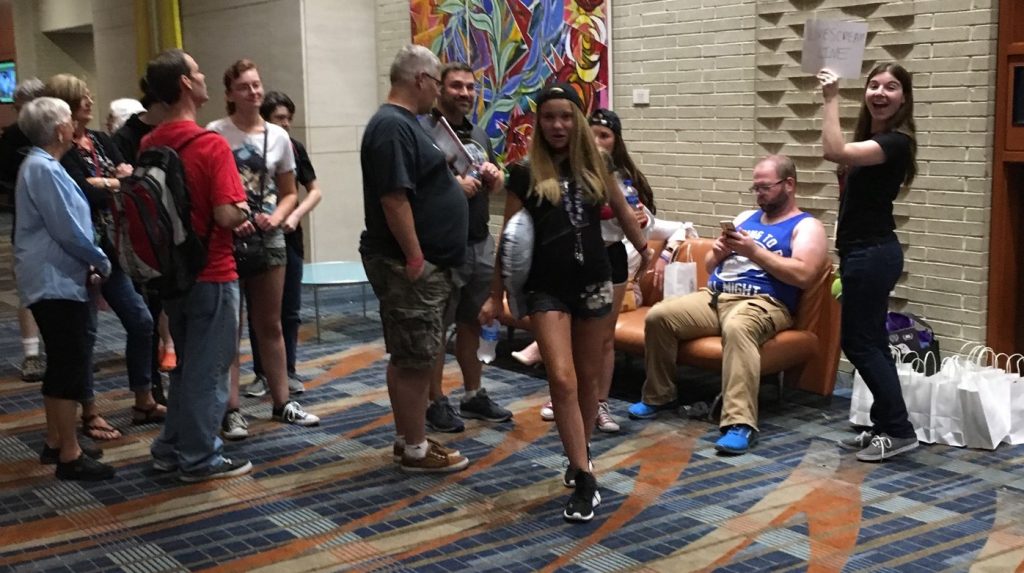 The room remained half-full as our showing was about to begin. Once we let in the ~20 people standing in line, it was standing-room only. And people actually did stand!

I gave away all my goody bags, which was probably Goal #1, since I really didn’t want to haul them back to the car ;D. I also got to give away maybe 10 posters on top of that. The lights went down, the screening began, and I don’t think I’ve ever had quite this much fun watching Livescream with a crowd before. They were super interactive and reactive. I’ll never get tired of seeing that!

After the movie, maybe a half dozen folks approached me for questions and poster signatures. And then Chad came up to me with a handful of bubble wrap. Under the bubble wrap, a statue – Best Feature! 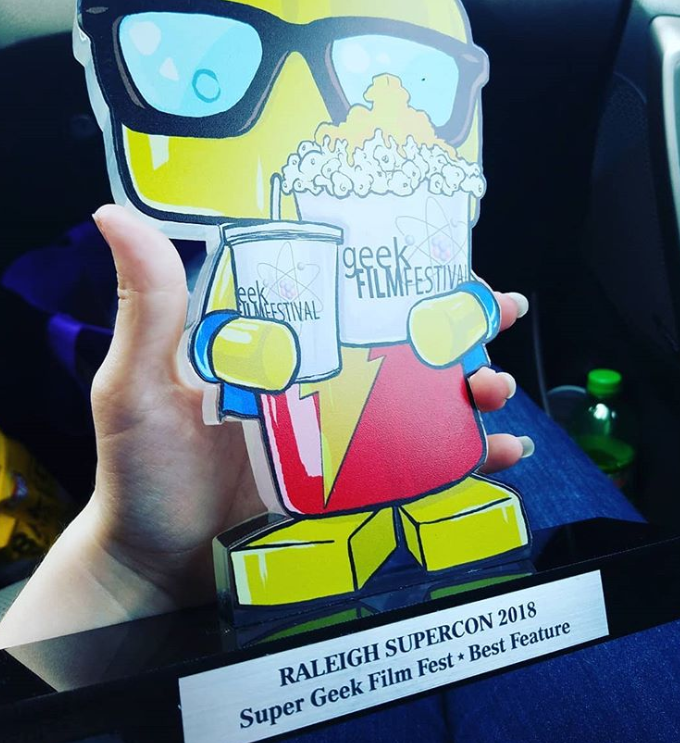 So all-in-all, a pretty amazing day. I was wiped by the time I got back to our hotel, but it was still pretty hard to sleep after all of that excitement. If you’re in the Raleigh-area and you missed this screening, you’ll have another chance on September 29th, at the Sick Chick Flicks Film Festival! And the next Supercon stop will be in Louisville, Kentucky on December 1st.

I’m definitely coming back to Raleigh Supercon next year, perhaps even as an exhibitor. If you’re on the fence about going, I highly recommend it. <3